close
Five steps How many electricity lines are needed? Where should they be built? These decisions are taken in five steps. More

close
Establishing requirements The goal in expanding the grid is to build no more new lines than necessary. This means we need to be able to predict energy requirements as accurately as possible. More

close
Background Here you will find background information about people and the environment as well as technical and legal aspects of grid expansion. More

close
Making your voice heard When is the closing date to submit comments? Who can get involved? On which platforms and channels is the Bundesnetzagentur present? More

Why is grid expansion necessary?

As is always the case with sophisticated infrastructure, the electricity transmission network needs to be constantly adapted to current engineering standards. The requirements to be met by the grid have been changing for some years. So much in fact, that small fixes just do not fit the bill any more. This is clear when looking at the goals that Germany has set for itself: the shift to renewable energy sources, maintaining a high level of supply security and the realisation of a single European energy market.

These central points of energy consumption seldom overlap with regions suitable for photovoltaic systems and wind farms. Renewable facilities are often operated most economically in locations where electricity consumption is low. This is the case with offshore wind farms and renewables in relatively sparsely populated areas in eastern and northern Germany. The electricity generated there must often be transported over long distances to the consumers. In the process, the existing network is frequently reaching its capacity limits.

Hardly any other country experiences so few power outages as Germany does. To hold on to this edge, a well-developed transmission network is essential to keep the security of supply at a high level. Such a transmission network brings the various regions and methods of energy generation together, making energy supply from renewable sources more stable.

Looking ahead, situations will still arise where sun, wind and biomass will not suffice to meet electricity demand. Gas- or coal-fired reserve power plants will have to step in and help out if we want our trams to run smoothly, our fridges to stay cool and the lights to always go on. The electricity generated from these conventional sources will also flow through the new lines, since they, as with the entire grid, will be transporting the whole energy mix being produced.

Energy in the European market

As is the case in other sectors, the European Union is striving for the establishment of a common single market for energy. Indeed, electricity has already become a commodity on international stock exchanges.

As a consequence of this, more often and in larger amounts than in the past, energy has to be transported over great distances, making more higher-capacity cross-border connections necessary. Not only do they spur electricity trade – they also play an important role in balancing out regional fluctuations in solar and wind energy generation. 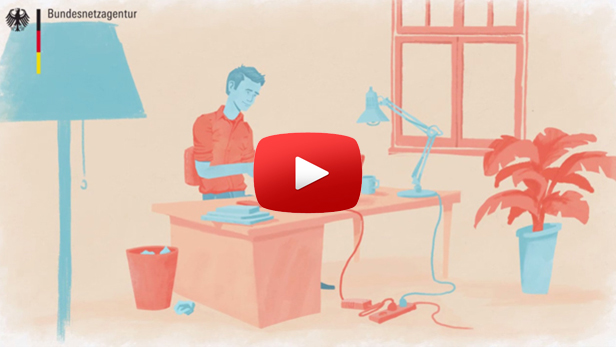